The Invention and Maturing of the Modern Day Denture

Dentures have become a common part of health for the elderly.  With the technology of the modern-day denture, those that wear the most current advancements do not have significant changes in what they can eat and the overall aesthetic appearance of their smiles.  However, this was not always the case.  As mentioned in the prior post on the history of the dental implants, history reveals that dental implants have been a part of human history for many years. In today’s post we are going to revisit history once again, discussing the history of dentures. 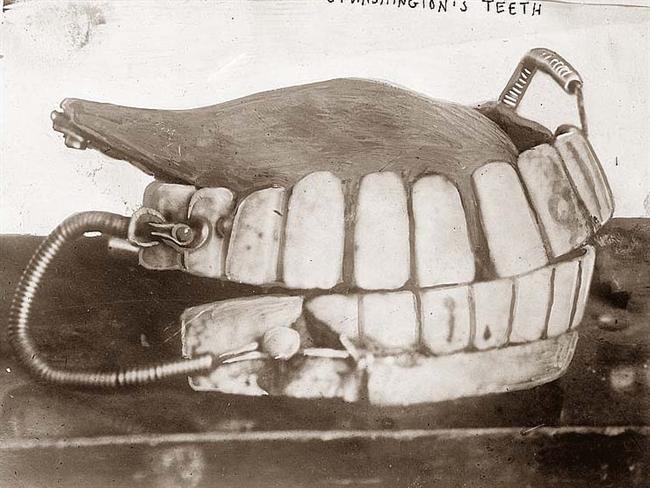 The need for dentures generally stems from the effect of sugar on the teeth, causing tooth decay and eventually the loss of teeth.  During earlier days tooth decay was also resultant from bread.  The milling process of early bread often involved sand.  The sand that was found in the bread would wear on the teeth, causing decay. Due to loss of teeth from both sugars and bread, the earliest replacements were found as early as 700 B.C.

Early dentures were purely cosmetic, as lack of teeth signified poor health and hindered the advancement of an individual professionally, socially and romantically.  Dentures would be taken out of the mouth before eating. It wasn’t until the middle of the 1700s that dentures were made in such a way that the person could eat while they were still in the mouth.

Whereas today porcelain is the primary substance for crafting replacement teeth, in the early days teeth were crafted from human bone or the teeth of other humans or animals.  In fact, it was not uncommon for teeth and bone to be scavenged from the battlefield, quite potentially leading to disease in the denture patient.

When considering early dentures, many think of the famous teeth of George Washington. However, this story is not completely accurate.   Due to the types of medicine that George Washington took, he began losing teeth while in his 20s.  The dentures that he had during his presidency were actually made from hippopotamus ivory, human teeth and carved elephant ivory.

Over the years technology has changed. Modern dentures are made from porcelain, tinted to reflect a natural appearance and are usually kept in place by jaw implants made from titanium.

Some of the technological advances in materials also include ways they are affixed.  From synthetic plastic resins to light metal alloys, the look and durability has improved.  Following those advancements dental implants came to be, allowing permanent dentures that are anchored in the jaw to make chewing possible.

Today teeth are designed based on each individual patient.  Dental lab technicians look at the mouth’s size and shape along with factor like the shape of the skull, sex, skin color, age and hair color.  Dentures of today are literally leaps and bounds ahead of what they were even 50 years ago.

As interesting as it is to learn of how those that lived in early times managed to keep up the appearance of their smile, technology has certainly made the modern-day denture both more functional and more beautiful.

The Difference between Conventional Dentures and Dental Implants

Care for Your Teeth during the Holidays