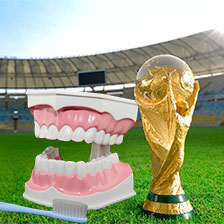 The World Cup of Dentistry 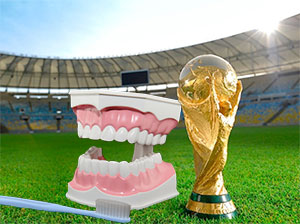 For the past month, the world has had its eyes fixated on the World Cup. We’ve watched teams from countries all over the world compete for the championship, and we’ve also celebrated the different things each country brings to the world community. With the World Cup wrapping up, we’re taking a look at how modern dentistry has been influenced by various parts of the world.

The Toothbrush – China and Switzerland

In ancient times, people would use a “chew stick” for dental health. They would rub thin twigs with frayed ends against their teeth to clear out any foods stuck between them. The modern form of a toothbrush – featuring bristles attached to a handle – was invented in China in 1498. The bristles were coarse hairs taken from a hog’s neck and attached to bamboo handles.

The toothbrush continually evolved until it was mass-produced in the 18th century, but eventually Dr. Phillippe-Guy Woog of Switzerland developed the first electric toothbrush in 1954. The toothbrush, known as the Broxodent, was connected to a power outlet (which allowed for long periods of brushing) and aimed to help people with limited dexterity brush their teeth more effectively.

The world’s first recipe for toothpaste is credited to the Egyptians. Around 4 A.D., the Egyptians crushed and mixed rock salt, mint, dried iris flowers and pepper to make a cleaning powder. The coarseness of the formula was known to cause gums to bleed, but research suggests it was fairly effective in maintaining clean teeth.

Throughout history, people had used implements such as sharpened sticks to clean between their teeth, but it wasn’t until 1815 that the idea of floss was introduced. Levi Spear Parmly, a New Orleans dentist, recommended that people should use silk floss for interdental cleaning. The trend caught on and Johnson & Johnson eventually patented the concept for commercialization.

The discovery of the modern titanium dental implant was actually an accident. In 1952, Swedish orthopedic surgeon Per-Ingvar Brånemark was researching bone healing and regeneration. He implanted a titanium chamber into a rabbit’s femur to help observe blood flow in the rabbit’s leg, but when he tried to remove it, he found that the bone had grown around the titanium (osseointegration), essentially fusing it to the rabbit’s leg.

Brånemark initially wanted to apply this discovery to knee and hip surgery, but he focused on dental applications because the mouth was a good spot for clinical observations. Dental implants are the main application for osseointegration and are currently the closest alternative to natural teeth.

Healthy Teeth is the Goal

No matter where all the tools come from, the goal is to keep your teeth health and your smile bright. Whether you need dental implants, veneers or just a regular cleaning, let Dr. Fitzgerald and his staff give you the assist. Call us at (972) 612-7800 or make an appointment for a complimentary consultation.